At Studio None, we’ve been using Docker since the beginning of the year and it has massively improved the way we handle our deployments. Docker’s primary objective is to wrap up an application and all its dependencies into a neat little container that can be deployed just about anywhere.

Understanding how docker works can be easily visualised. 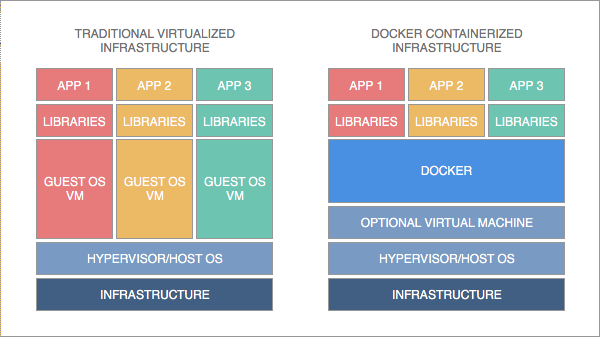 In many traditional configuration, a single application is bundled up with the operating system and is mounted on a hypervisor. This uses a considerable number of resources from RAM to Disk Space & CPU. Additionally, you must maintain multiple guest operating systems and keep their libraries up-to-date with the requirements of your application manually.

Docker provides a layer of automation and separation from the traditional configuration by only containerizing the components that are necessary for the application to run while providing a level of operating system access that is locked-down enough to ensure your process cannot modify the operating system or affect the processes running in other containers.

It’s recommended practice to run only one application per container. For examplem, if you’re running a Node.js application, nginx server and PostgreSQL database; you would containerize each seperate process while providing links so that they can interact.

Docker makes it amazingly easy to create an application with the libraries it needs to run on top of the Linux kernel. It does this by providing a registry of images to load onto a container, and by layering the changes to an image to make it faster to download & deploy.

I’m not going to run through how to install Docker, if you’re looking for that guide, Docker has provided one themselves: https://docs.docker.com/mac/started/.

Like I said, Docker contains file system layers that include libraries & bins required for your application to run. To see how this works, try creating an Ubuntu container using this simple command:

The command will use the Ubuntu (ubuntu) image to run a single process (/bin/bash) which is made interactive (-i) and allocates a pseudo-TTY (-t) allowing us to emulate a real-text terminal interface.

Docker will now download the layers from Docker’s public registry required for that image. Similar to source control, Docker stores changes to the file system over time—you can roll back to a layer or merge layers into a single layer depending on your functionality. These layers can be stored in images and uploaded to the Docker registry.

Once downloaded, you can interact with a containerized Ubuntu operating system. You’ll notice if you exit the process that the docker container will shut down. You can check this by running:

Any changes you made to that machine will now be lost. So, to commit machine changes and create your own image, you can commit the image from the host operating system while the container is running. There’s a big guide on how to commit, pull and push Docker images in the Docker documentation.

Dockerfiles are the easiest way to automate image creation—allowing you to describe the way to create an image. An example of a Dockerfile required to create an Ubuntu image:

Dockerfiles control the processes that you want to run by automatically executing run & start of a docker container. Try and keep the RUN commands to a minimum as Docker is young & buggy when working with RUN commands in the 30s or 40s. It’s best to put the majority of your work into a shell script and execute that shell script.

For more information on the Dockerfile, check out Docker’s Documentation.

If you’re running a mission-critical application like MySQL, PostgreSQL or even Redis—it’s best to utilize Supervisor. As mentioned earlier, once the process ends the Docker container quits and all changes are lost. Supervisor carefully monitors the processes running and if they crash, will bring them back.

There are a tonne of tools to help you work with Docker in production—one of the better tools is Rancher; which I’ll write about at a later date. I’ll also talk about limiting memory uage and auto-scaling containers on DigitalOcean.

A trait of Docker is that it doesn’t persist state. This is usually great when working with worker applications that don’t need to store and share data, however in the case of databases or even small WordPress instances, persisting state... Continue →